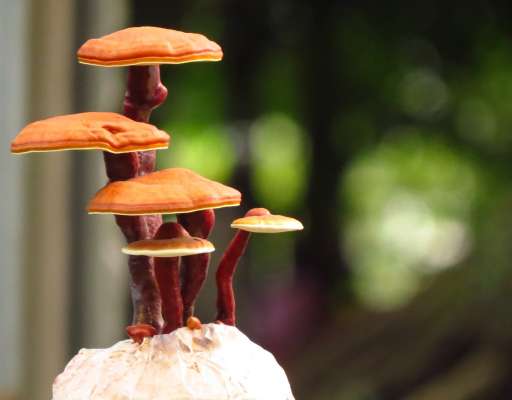 Coffee from mushrooms or coffee with mushrooms?

I just wanted to buy something for lunch in the supermarket. Then, however, I saw a display with stylish packaging. In addition to chia pudding, porridge and golden milk, there was also mushroom coffee. I had never heard that before. So I had to buy a package to try at home. How the coffee tastes, why it is so special, whether this is a new trend and where you can get the coffee, you will read in the next paragraphs.

After some research, it turns out that mushroom coffee is not a new trend. When coffee was in short supply in the Second World War, one tried to find cheap alternatives. In addition to malt, cereal and chicory coffee, in Finland the local mushroom Chaga was used as a coffee substitute. Decades later, in 2017, mushroom coffee became a trend in Australia. Last year it became trend in California. It seems as if the company Four Sigmatic is leading the market of Mushroom Coffee, or short Shroom Coffee. The Berlin start-up, from which I have my mushroom coffee, seems to have a very similar approach. But why are mushrooms so popular in coffee?

What is mushroom coffee?

Quite simply, it is roasted coffee with mushroom extract. The mushroom is not added due to the taste, but to have a positive effect on cognitive performance and energy that lasts long. Medicinal mushrooms have long been used in traditional Chinese medicine. When healthy food becomes a trend, it is usually quite expensive. My 80g ground coffee costs € 4.99. So a cup of mushroom coffee costs € 0.62. In comparison, a cup of specialty coffee costs around € 0.35 – € 0.40. Next, let’s take a look at the mushrooms and what they can do.

Mushroom extracts and their effects.

This mushroom has a liver-regenerating and therefore detoxifying effect. The improved liver metabolism leads to a reduction in blood lipid levels. The Reishi is one of the most important medicinal mushrooms for allergies of all kinds. The triterpenes contained in it reduce the release of histamine. Inflammation on the skin and mucous membranes is reduced. It regulates the immune system and thus awakens and supports the self-healing powers of our body even with viral diseases such as herpes zoster and herpes simplex. The Reishi helps with asthma, chronic bronchitis, cough and shortness of breath. Especially in chronic respiratory diseases with reduced oxygen supply, it improves the oxygen saturation of the blood due to its germanium content.

Hericium is important for the build-up of the stomach and intestinal mucosa, which acts as a protective barrier against pollutants. This is particularly important for food intolerances, all allergies, skin diseases such as neurodermatitis and weakness of the immune system. It has also proven its worth for fears, stress, restlessness, insomnia and gaps in memory. This fungus has a balancing and calming effect, especially in the case of irritable stomach or irritable bowel syndrome. The polysaccharides it contains have an anti-tumor effect.

This mushroom is considered by experts worldwide as one of the most important medicinally usable mushrooms. Thanks to its immunostimulating properties, it is used particularly in cancer therapy. Different cell types of white blood cells (leukocytes) are activated by Maitake. The effectiveness against tumor formation as well as against existing tumor cells exists even when oral Maitake extracts are taken. The formation of metastases can thus be prevented. The very high natural content of polysaccharides has also been shown to increase the immune response of macrophages, killer cells and T-lymphocytes in the blood and thus also helps in the defense against viruses and infectious diseases. Maitake also helps with osteoporosis, obesity, diabetes and high blood pressure because it has been proven to lower cholesterol and blood lipid levels and reduce blood sugar levels.

Because of its high vitamin B content, it is a natural stimulant. The antioxidant content helps with skin diseases such as neurodermatitis. Zinc, potassium and iron have a positive effect on the immune system. Finnish and Russian doctors use the Chaga mushroom because of its properties in many medical treatments. It is used as a blood pressure lowering as well as a remedy for cholesterol deposits. The Chaga also shows or protects against diseases such as gastritis, chronic intestinal diseases, periodontitis, cancer, asthma and other diseases. It should be able to clean the blood, detoxify the liver and bile, stop bleeding gums or improve sleep.

This mushroom improves lung and kidney function. It is used to treat respiratory diseases and also tuberculosis. Symptoms of shortness of breath, chronic bronchitis, pulmonary obstruction and asthma have been shown to improve. With greater energy availability, signs of aging such as tiredness, dizziness, tinnitus, forgetfulness and feeling of cold, declining libido and impotence can be successfully treated.

The preparation is not rocket science – after all, the coffee is already ground and can be prepared the way you like.

My test coffee is a 100% organic Arabica coffee and contains 400 mg of mushroom extract per serving (10g coffee). The coffee smells strong, but then unfortunately tastes ordinary and not like a good specialty coffee. I am also missing further information on the coffee growing area or variety on the packaging. So I bought Chaga, Reishi and Lion mane mushroom extract and simply mix 0.4g mushroom powder with my 10g coffee before brewing. Is much cheaper and tastes better.

For those who prefer to pimp their favorite coffee like in California coffee shops, I have the following recipes:

Mix 1 tsp of chaga, 1 tsp of cocoa powder, 1 pinch of vanilla and cinnamon with an espresso in a glass, sweeten with honey and pour on with hot milk foam. Tastes like a mochaccino and works both hot and cold on ice.