For sure, because most of the coffee you can buy is far too cheap! How can 500 g of roasted coffee sometimes cost less than 3 Euros if it takes care and harvest of an entire coffee tree in one season, as well as the processing of coffee cherries, the transport from the tropical region to us, the roasting of the coffee, packaging and the sale, plus additionally the coffee tax of more than € 1 in Germany?

Before I write about the price increase, let’s take a look at the past two years, when the coffee price decreased massively.

There is no fixed price for green coffee. It varies depending on the variety and quality. It is usually sold through contracts, the execution time and costs of which are determined in advance (futures). The price fluctuates very strongly and depends on the terms, above all on weather and harvest conditions as well as inventory levels.

Coffee producers have already suffered from the price drop in recent years. Many coffee farmers tried to increase their yield under the price pressure. This led to ever larger monocultures, depleted soils, ever lower wages and sometimes even child labor. In particular, the world’s largest coffee producer, Brazil, with a market share of almost 40%, depressed the low world market prices due to good harvests and stocks and the low wages of the plantation workers.

However, some farmers from Brazil, Guatemala or Colombia had to give up growing coffee. Because the sales price was now below the production costs. Until October 2019, the fixed customer prices was so low that even Starbucks supported its suppliers, which are primarily located in Mexico, El Salvador, Guatemala and Nicaragua, with a special payment of USD 20 million in order not to lose them. 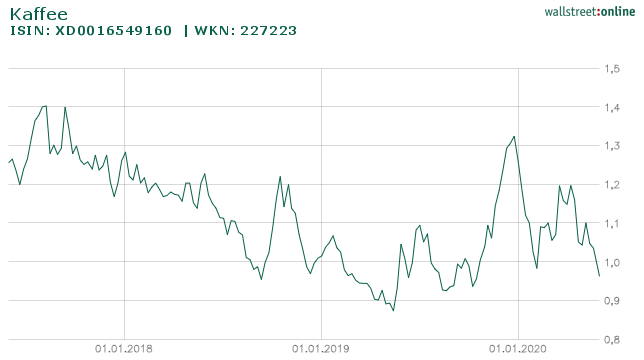 Why did coffee prices skyrocket a few months ago?

There was a change in October 2019. The Brazilian forecasting authority Conab expected a harvest minus of 27% for Arabica coffee due to too cool temperatures and low rainfall. Together with the fairly good Robusta coffee harvest in Vietnam, banks still predict a minus of 0.9% to 2.82% for 2020. In addition, some Brazilian coffee farmers are rethinking and shifting their production from mass production to smaller quantities of quality coffee, for which they get better prices.
The players in the coffee markets – from producers to buyers, dealers and roasters to speculators – responded. The price has now calmed down again to 132.5 US cents. It is unclear whether and how much of the rising coffee prices will remain with the producers. Because farmers only get about 6% of it with conventional coffee. The major part of at least 2/3 is shared between the transport, the roaster and the retail trade. Direct importers and roasters pay a much better price to the farmers. So if you want to drink really good coffee, where the producers are paid fairly for their work, you should buy your coffee from the coffee roaster in your neighbourhood, and not from Nespresso, Starbucks, Aldi, Tchibo and Co. … even if it says fair trade on the packaging. The difference is really clear on the graphics of Quijote coffee, a direct import roaster from Hamburg.