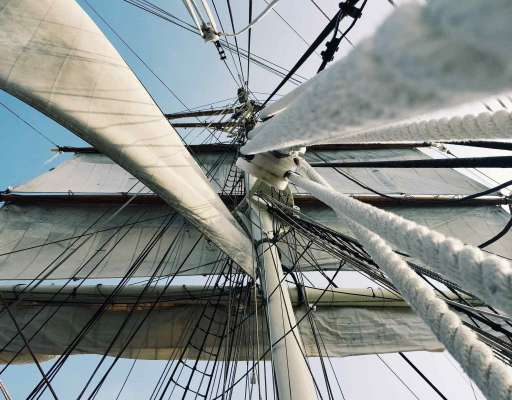 The CO2 footprint of coffee is not particularly small. The plant grows in tropical regions of the world and is shipped around the world, only to be roasted, sold and drunk here. Even the local roaster, which maintains direct contacts with small farmers, paying fair prices for green coffee and supports local projects, generally ships its green coffee to Germany with containers. But even the seasonal eco-terrorist from Berlin Kreuzberg doesn’t want to do without coffee! Are there alternatives to container ships?

More than 90 % of global world trade is handled by container ships. Accordingly, over 90,000 ships are currently on the oceans! No other industry is destroying the climate as much as ocean shipping. The 15 largest ships alone produce as many pollutants as 750 million cars a year. Their fuel is heavy oil. That is why the freighters emit tons of sulfur oxides, nitrogen oxides, soot particles, heavy metals and fine dust. By the way, with the emission of nitrogen oxides and sulfur dioxide, shipping exceeds air traffic many times over. Necessary filters or catalysts are still not mandatory. The consequences for people and nature are correspondingly catastrophic.

Every year, 40,000 containers of coffee arrive in Hamburg alone. But there are also transport alternatives – by sailing ship!

The Avontuur, built in 1920, has been owned by the Timbercoast since 2014 and has been transporting around 70 tons of coffee, cocoa, spices, tea and spirits under the German flag for 2 years. The sailing ship generates 90% less CO2 emissions compared to conventional coffee transports. Of course, the transport costs significantly more than by container ship. But that doesn’t make coffee unaffordable. 250 g of directly traded organic sailed coffee costs between € 7.50 and € 9.50. At the end of the article I have listed some coffees for you to order. The current demand for sailed goods already exceeds Avontuur’s transport capacities. An expansion of the fleet is therefore already being planned.

The crossing from Central America via the Azores to Hamburg takes around 70 days. From there, the coffee beans are loaded onto cargo bicycles and transported to the warehouse. With the help of CO2 certificates, the resulting emissions for onward transport and further processing in Germany are offset. Of course I absolutely had to try such sustainable coffee.

A few days ago the postman finally rang my bell to deliver my first packet of coffee, which was sailed across the Atlantic. It is Café Chavalo‘s Segel Kaffee. 250 g of roasted coffee from just 30 sacks of fairly traded green coffee in organic quality – a real rarity!

The organic green coffee comes from the cooperative association Tierra Nueva in Nicaragua. Around 250 small farmers form the association to jointly market their harvest and improve living conditions in the countryside. They grow coffee, ginger and turmeric on small parcels in mixed cultures at an altitude between 700 – 1,200 m.

Tierra Nueva is even a member of the cooperative in Germany. This means that small farmers in Nicaragua can have a say in the General Assembly on important issues.

The coffee is 100% Arabica – a mix of the varieties Bourbon and Caturra. The Preparation is recommended as filter coffee or with the French Press. The decision is easy for me, because the coffee should taste nutty, chocolatey. With the French Press, these flavors just get a lot more punch. Just opening the coffee pack makes you want more than just one cup. In terms of taste, it also convinces me – a typical South American which, thanks to its intensity, doesn’t loose any taste with a dash of milk – delicious! Try it out for yourself. I picked out some sailed coffees for you below.