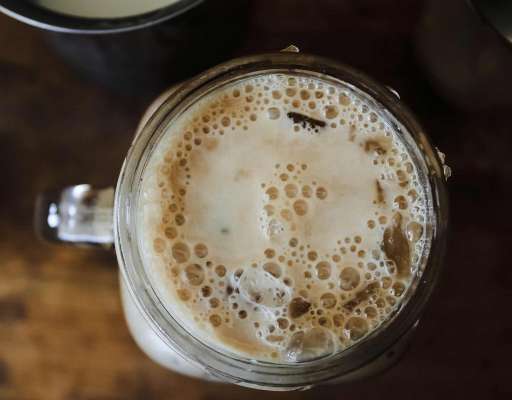 Anyone who has ever been to Latin America or a good Mexican restaurant will probably know Horchata. It is a rice milk mixed with cinnamon. In combination with an espresso or a cold brew coffee shot on ice it is already trendy, at least in Los Angeles.

I’m already a fan! I love a refreshing horchata, coffee obviously … and on ice … with cinnamon – that can only be awesome. Since this trend has not reached Berlin yet and homemade tastes always best, I have researched how to prepare a traditional horchata. The classic horchata does not only contain water, rice and cinnamon. The recipes also include cows milk, condensed milk and evaporated milk. With regard to all lechetarians, vegans and hipsters you get 3 recipes to prepare horchata to choose from. So everyone has a great summertime.

You know how it is with traditional recipes, each family has its own mixture and way of preparation. Here is one that I find quite delicious.400 g of rice

Soak rice overnight in water with cinnamon. The next morning, remove the cinnamon stick and blend. Then add the vanilla extract and the condensed milk and mix until the hochata gets a creamy consistency. Strain the mixture, add the milk and mix well. Then fill the finished horchata into glasses with ice cubes. Finally, layer the Espresso or Cold Brew Coffee on top and sprinkle with cinnamon powder.

Bring 1 cup of water and 1 cup of sugar to a boil in a saucepan. Boil until the sugar has completely dissolved. Remove from heat and let the syrup cool to room temperature. Add rice, cinnamon stick and 3 cups of water to the blender and mix until the rice is in small pieces. Add the remaining 3 cups of water and let rest for at least 3 hours. Add the mixture again in small quantities in the blender and mix until rice and cinnamon are crushed. Strain the mixture through a very fine sieve. Then add a 3/4 cup simple syrup and stir. Store in the refrigerator to cool. Fill the horchata into glasses with ice cubes. Finally, layer the Espresso or Cold Brew Coffee on top and sprinkle with a little cinnamon.

Wash Chufas and let soak overnight. Clean the next day and mix in a blender with 250 ml of water to a pulp. Add cinnamon and lemon peel and let it soak in the fridge for 2-3h. Then pour the mass through a cotton cloth and squeeze vigorously until no more liquid is in the mass. Add remaining water and the sugar. Blend vigorously. Then fill the horchata into glasses with ice cubes. Finally, layer the Espresso or Cold Brew Coffee on top and sprinkle with a little cinnamon.