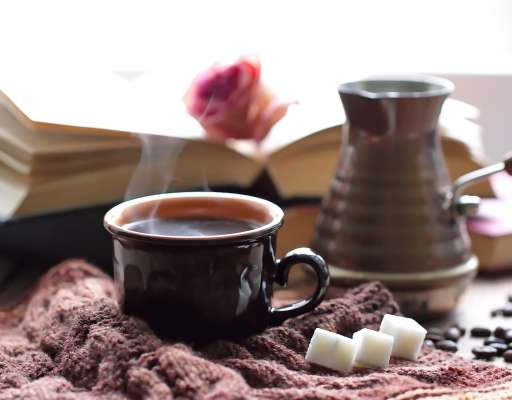 As the book fair takes place in Leipzig until tomorrow and there are such beautiful stories about coffee, today I will introduce you to a few books.

A historical adventure novel that takes place in 1683. Coffee houses are booming in Europe. The monopoly on coffee, however, have the Turks. Who wants to smuggle it out of the Yemeni mocha, will be punished with death. Obediah Chalon, speculator, trader and trickster should still dare. With financial support from the United East India Company, he assembles a troupe of international specialists. Will he succeed?

With 21 cartoons for all Germans who finally want to understand Vienna – and all Viennese who are the same with the Germans. This first volume of the series WIENER MELANGE is about the coffee and the associated intercultural traps that Vienna has for Germans.

The book is about an Amsterdam merchant named Droogstoppel who lives on the coffee market. A former, now destitute acquaintance, asks him for the aid to publish a manuscript. This manuscript, largely autobiographical, deals with the career of the colonial official Max Havelaar on Java in the Dutch East Indies. It ends when he reveals serious transgressions of his superiors and ultimately questions the entire colonial system. In 2002 the Dutch Max Planck Society declared the book “Max Havelaar” the most important work written in Dutch.

Frankfurt 1729: After the death of her husband, Johanna, with the help of the Jewish musician Gabriel, manages to make the family’s coffee house the best in the city. Until a nasty intrigue drives them out of Frankfurt. Via Venice she flees to Constantinople, where she ascends to the coffee master of the sultan. But Johanna can never forget her homeland – nor her secret love for Gabriel

Badreya El-Beshr, born in Saudi Arabia in the early 1960s, tells the story of Hind, a young woman in her novel “The Fragrance of Coffee and Cardamom,” which is likely to be quite similar to the author’s. It is the story of the liberation from a tradition that can only appear to be of very limited appeal to those born as girls in Saudi Arabia.

The young tropical planter Carl breaks in 1931 in a new life. At the tender age of only 21, he dares to step from the German colonial school in Werratal to the central highlands of Angola, where the cultures of the German and Portuguese immigrants and the long-established Umbundo clash. He builds his own coffee plantation despite all adversities. It tells of the beauty of nature, the peculiarities of people and the dramatic events of terrorism and civil war from the 1960s – and, of course, love.

Daniel fills an old dream and opens a cafe. Even the way to the opening is paved with good advice and disasters. But the worst is yet to come: guests! A restless poodle grandma, a down-to-earth hipster, a football coach with an alcohol problem, a supposed prodigy named Jonas Hortensius, and Daniel’s parents and his wife Aylin’s Turkish family. With all the absurd situations and wonderful characters, in the end you just want to be a regular at this café.

Ein Coffee to go in Togo

One day, business consultant Markus Weber throws his perfect world over the edge and rushes headlong into an adventure. He sits down on his bike and drives off – through 26 countries, to Togo. His journey takes him through deserted Eastern European villages and over grueling sandy tracks in West Africa. He hitchhikes through the Sahara, cycles through the undeveloped Guinean rainforest and smugglers across closed border crossings in Liberia. Everything to answer two questions: Who am I? And: is there actually coffee to go in Togo?

Ethiopian highland or Colombian bad weather harvest? Hans Brionis is the owner of a small coffee roasting company. Just before Christmas, a story changes Brioni’s life. The cause is poisoned beans. Is it an extortion or the act of a madman? In search of the wire-pullers, an inexperienced reporter dives into Brioni’s world and discovers the magic of a drink. The hunt for the perpetrators leads across central Europe, from Berlin to Vienna, to the city of coffee houses.