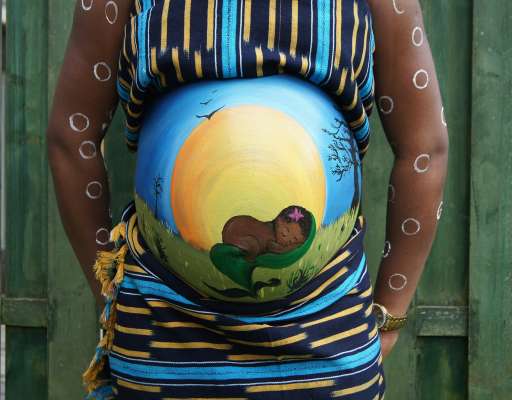 Many women who are expecting a baby, of course, only want the best for the child and adhere to some advice that they get from the doctor. By this I mean not only the natural avoidance of alcohol and smoking, but also the absence of unhealthy processed food, too much sugar, sushi, raw milk cheese such as Camembert or Mozzarella, the soft Sunday egg, medium rare steaks, graved salmon, processed fruits and vegetables. But what about coffee?

Those who are pregnant are usually always tired. So, how to survive without coffee? According to the European Food Safety Authority, up to 200 mg of caffeine a day are fine. Depending on the preparation coffee contains a different amount of caffeine:

I’m only referring to the caffeine in coffee, but of course some teas, soft drinks, and cocoa also contain caffeine. Reading further is worth it, because even these amounts of caffeine have effects.

The effect of caffeine on the baby

The caffeine passes through the placenta unfiltered. The unborn child takes in as much caffeine as the mother. Caffeine reduces the blood flow to the mother cake. This in turn increases, if only slightly, the risk of premature or miscarriage. Drinking more than 2 cups of coffee a day doubles the risk of miscarriage, according to a study published in 2016 by the U.S. health institutes and the University of Ohio.

In addition, caffeine hinders the absorption of vitamin C, iron and calcium. To avoid this, coffee should be drunk about 2 hours before or after meals.

In a study of almost 60,000 pregnant women, Norwegian scientists found that with 100 mg of caffeine a day, the birth weight decreased by 21 to 28 g. The newborns suffered from adjustment disorders more often and have problems controlling temperature or blood sugar.

Again 2-3 small cups of coffee should be fine. But the caffeine is excreted in breast milk. With this amount, the infants have no sleep problems. But it can cause stomach ache, bloating or restlessness, according to the German Nutrition Society.

Sounds strange, but also if you want to get pregnant, you should pay attention to your coffee consumption! Scientists in the Ohio study from 2016 even provided evidence that coffee that was drunk before conception could also increase the risk of miscarriages. And here, exceptionally, it’s not just about the consumption of women, but also that of men! Both should not consume more than 200 mg of caffeine a day.

The amniotic fluid ideally has a pH of 8.5 – so it is basic. Stress, too little exercise and foods such as sugar, meat and milk products, white flour products and coffee acidify the body. With the help of sufficient minerals, the body can neutralize them again. During pregnancy, however, the body has an increased need for minerals anyway. In extreme distress, the body uses the mineral deposits in the tissues, bones, scalp and teeth to chemically neutralize the acid. This is certainly the worst case, but the typical pregnancy symptoms at the end of pregnancy, such as skin problems (e.g. skin fungus), stretch marks, itching, hot flashes, edema, migraines, hemorrhoids and nausea are also signs of overacidification of the body.

Even if it’s difficult – and I know what I’m talking about 😉 coffee consumption during pregnancy and breastfeeding should be reduced or avoided completely. I was lucky that I had no appetite for coffee in the first trimester. But that has changed in the meantime. I still do not try to consume coffee every day, and if so, a maximum of one cup a day. I also try to keep moving and eat healthy. So far it works very well. Please write me your experiences about coffee in pregnancy in the comments!